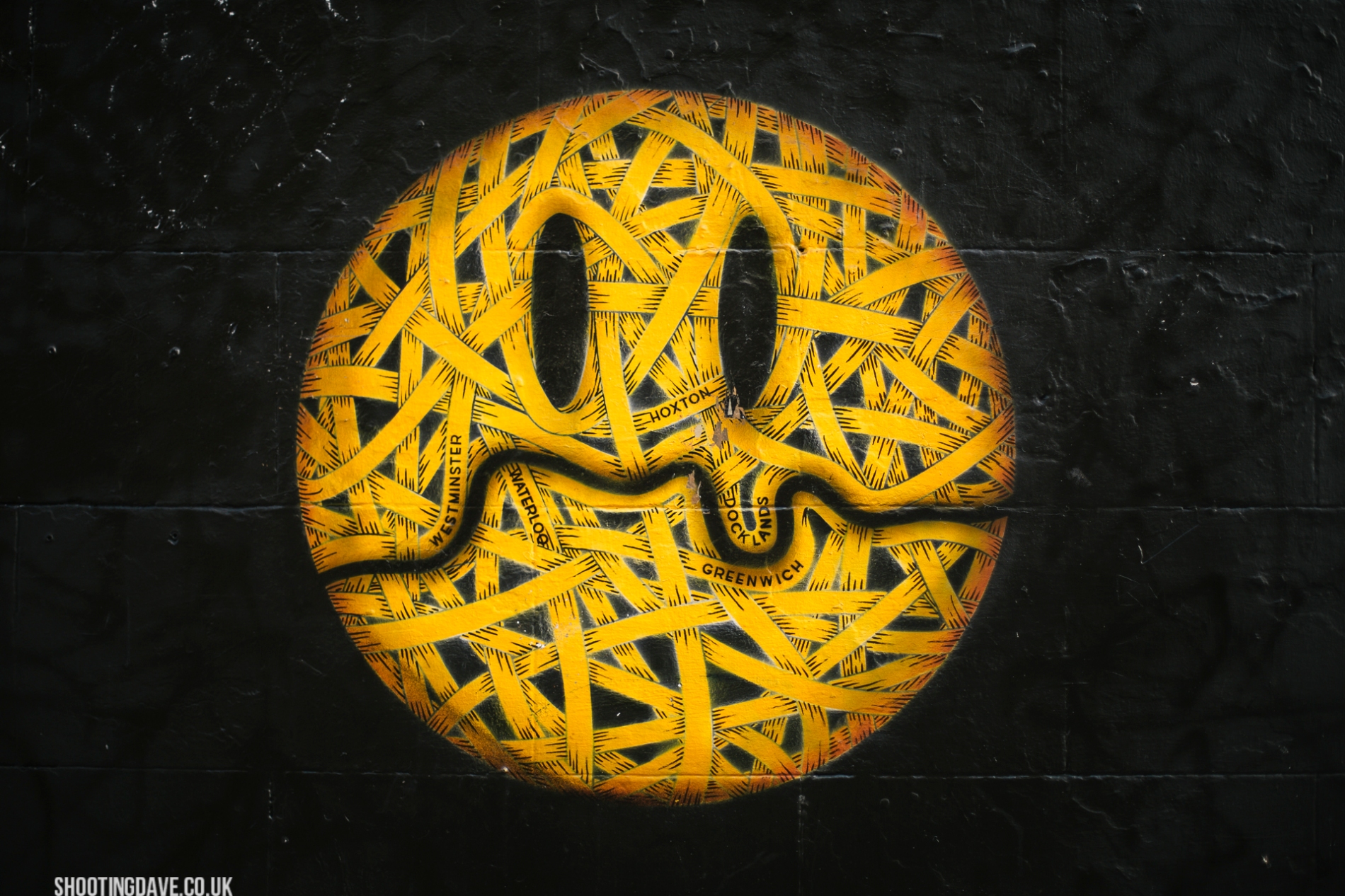 …well not really panic, more mild anxiety. Actually not even that. Saturday London was strangely subdued, Brick Lane was quiet, Spitalfields was practically empty and Shoreditch was a ghost town. To the East Londoners credit, it was about noon and I doubt they would have risen from the payday fuelled hangovers.

I met up with fellow #Fueltographers Phil (Paps) and James (Lowmileage) as well as our friend Brad in North London. We grabbed a coffee before making our way East with me acting as the clueless tour guide. 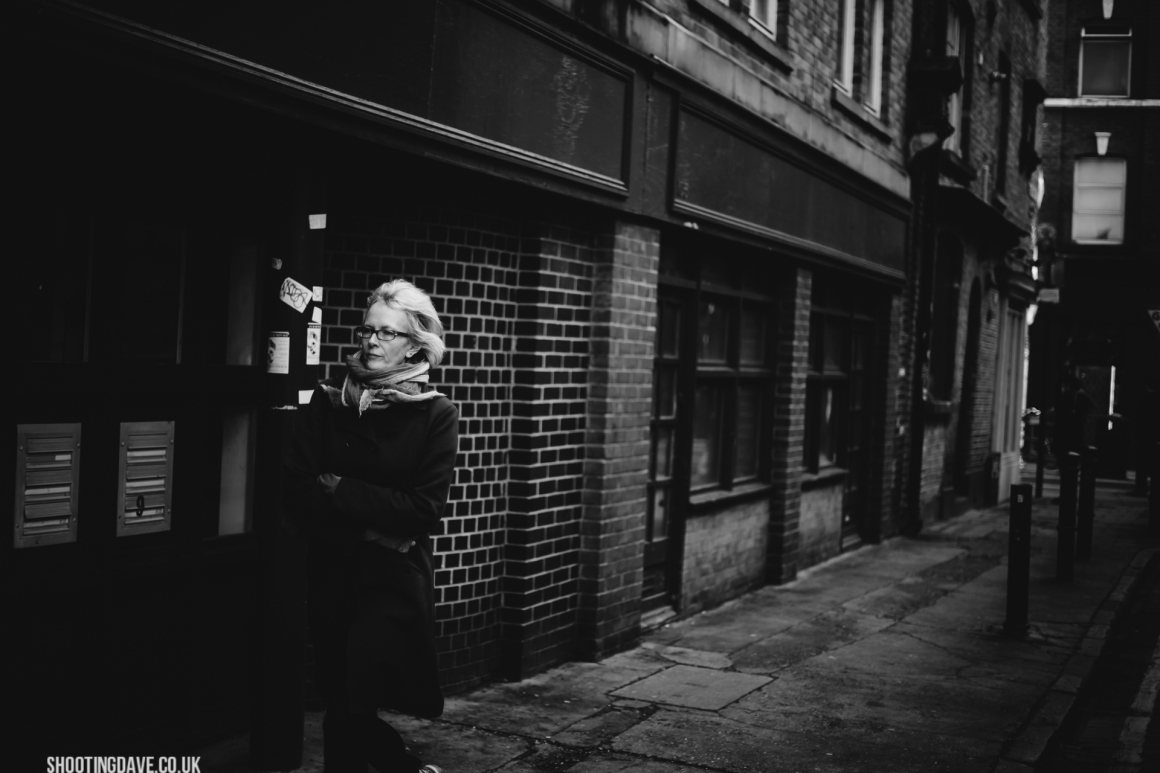 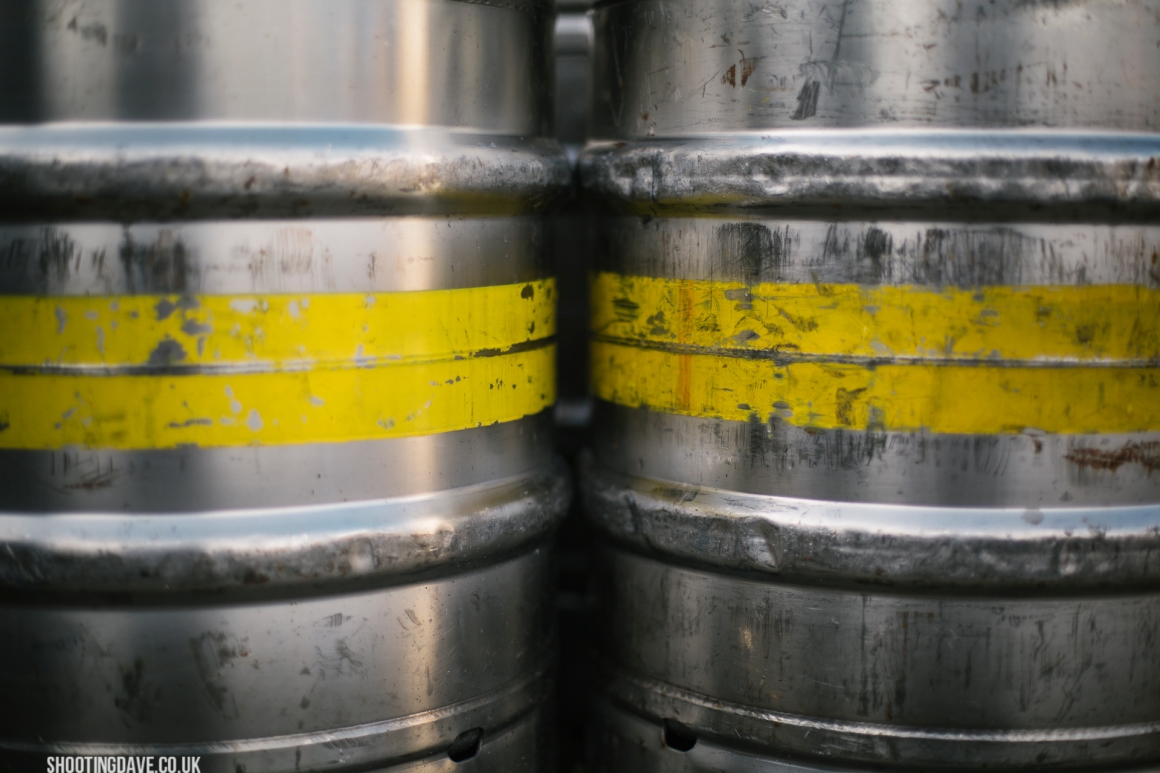 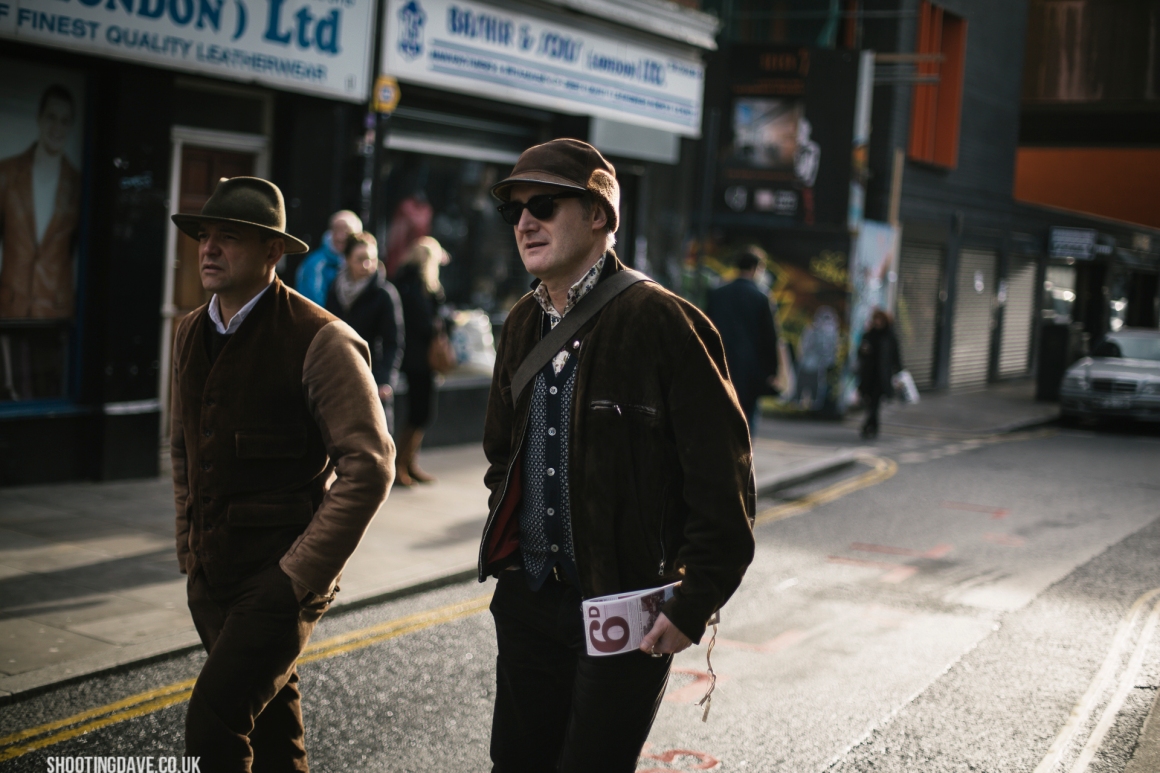 I’ll admit it had been far too long since I had shot on the streets and this was the first time with the new set-up. Feeling the benefits of group mentality I opted to shoot with a 50mm on the 5D3 instead of cowering in the long-range comfort of the 135L on a crop body. This required me to get much, much closer to my subjects. To the point where I could almost reach out and touch them. (I didn’t, I’m not weird). 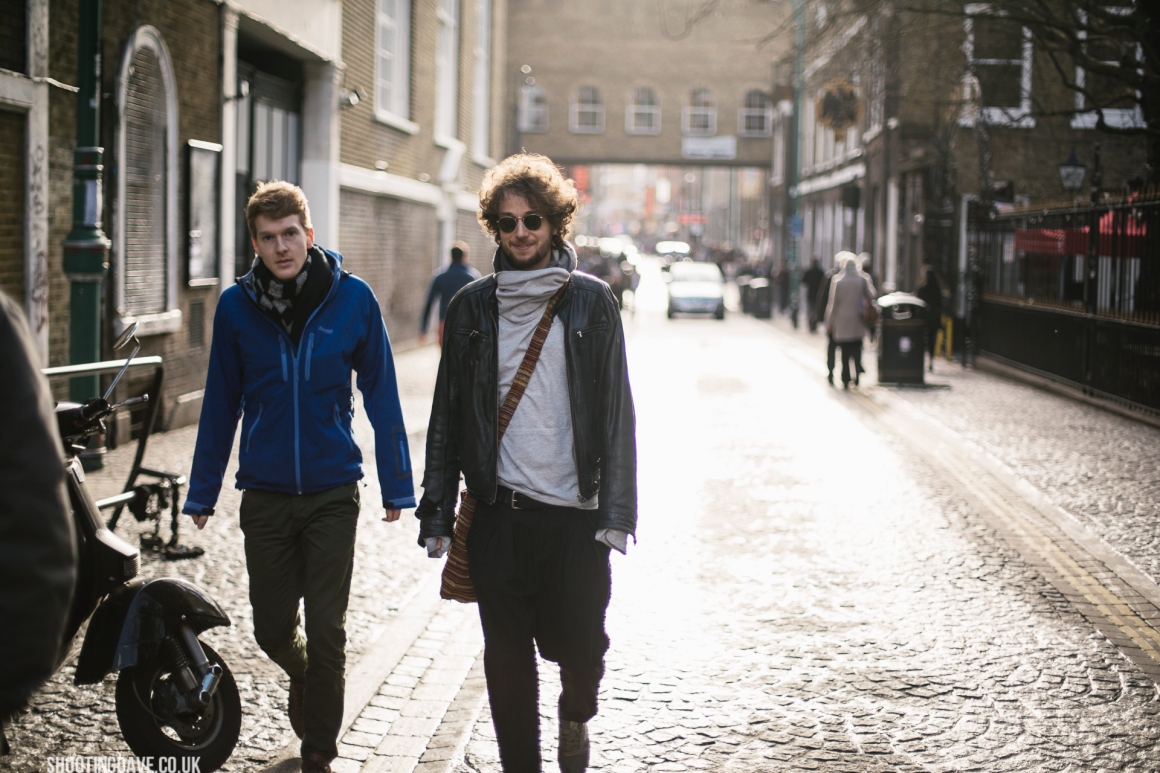 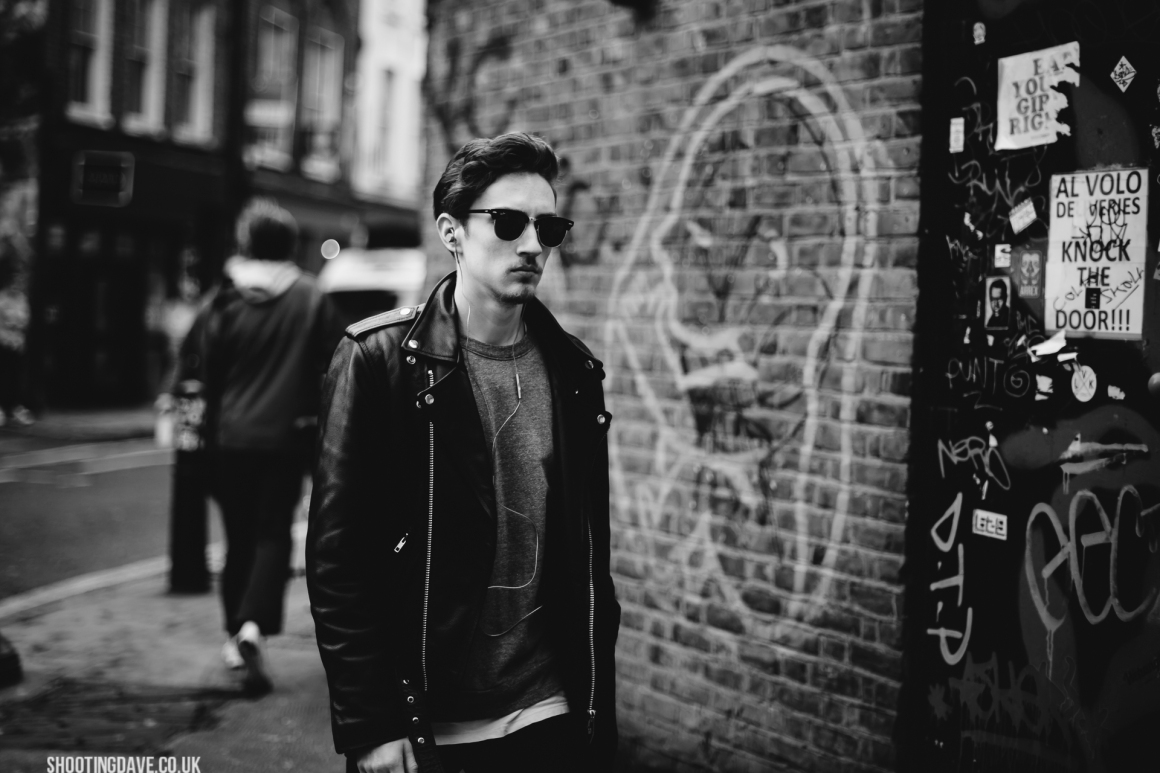 And it was after warming up through Shoreditch/Brick Lane I realised something, no one gives a toss if you point a camera at them! Conclusion; East London is full of posers! I am of course kidding Eastenders, no need to take your wayfarers off and stare ironically at me.

I took the guys down to Spitalfields Market which is often bathed in soft diffused light with loads of layers and nice backgrounds. Although all three of them got distracted by a man steaming a hat. 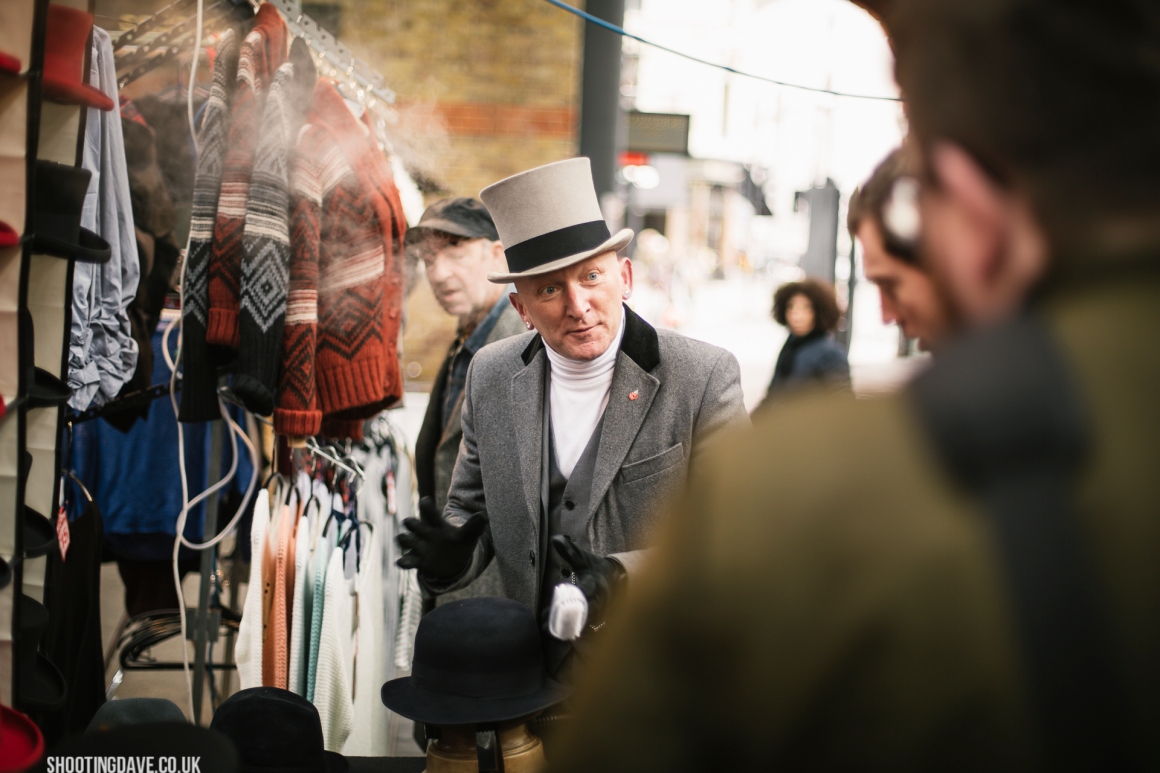 Afterwards we headed down towards London Bridge, stopped off at a coffee shop to grab something to eat. Which incidentally was a rookie mistake as after lunch we went to Borough Market…which.is.full.of.food! 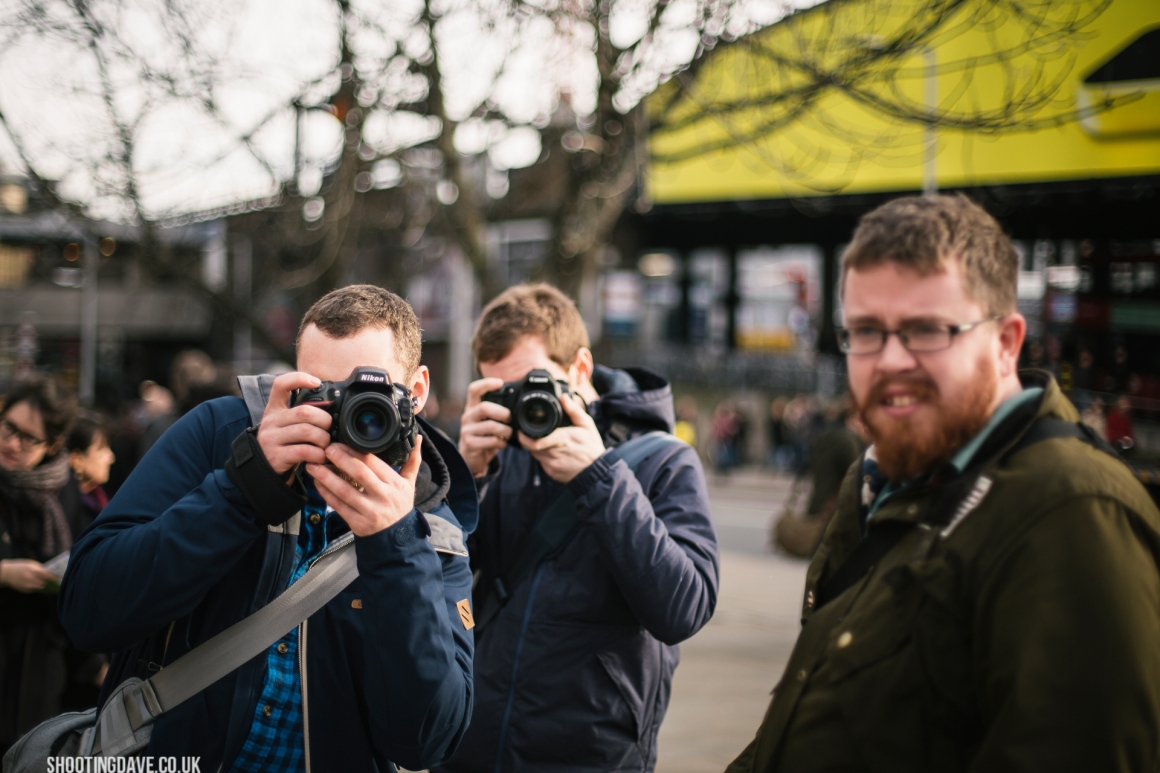 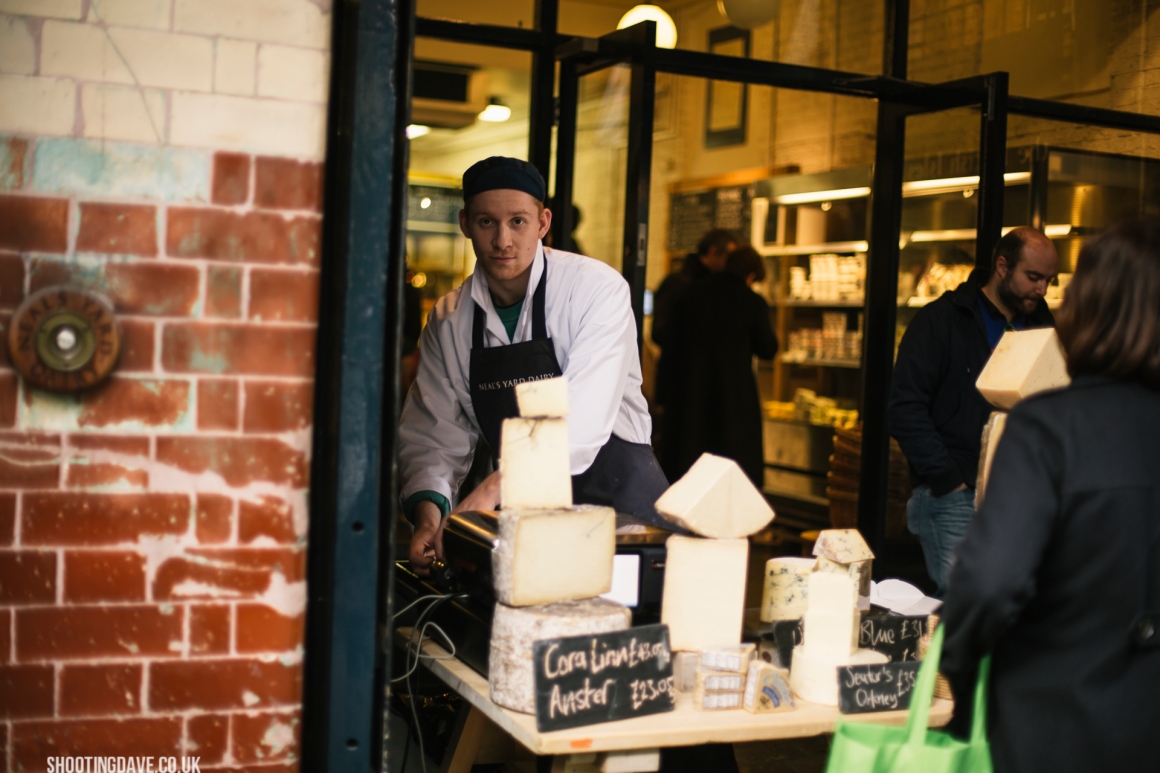 Before marching down to South Bank to search out some skateboarders. 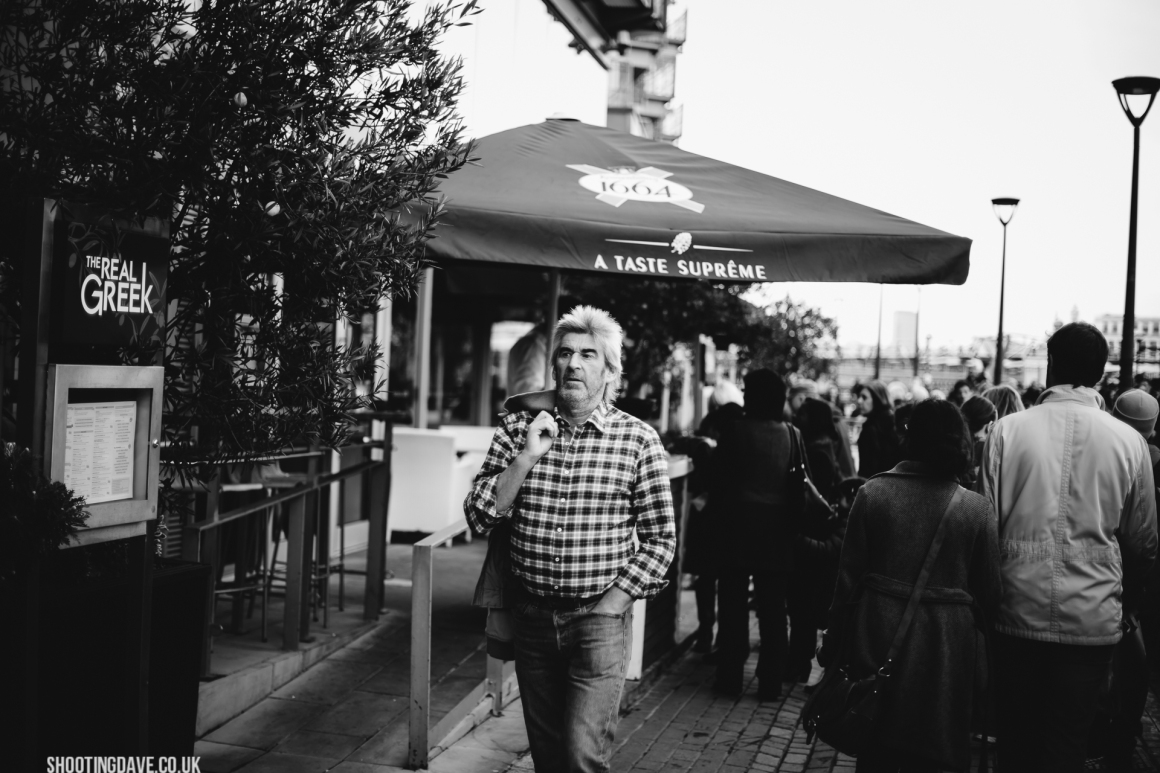 Found Cantona’s Dad on the way… 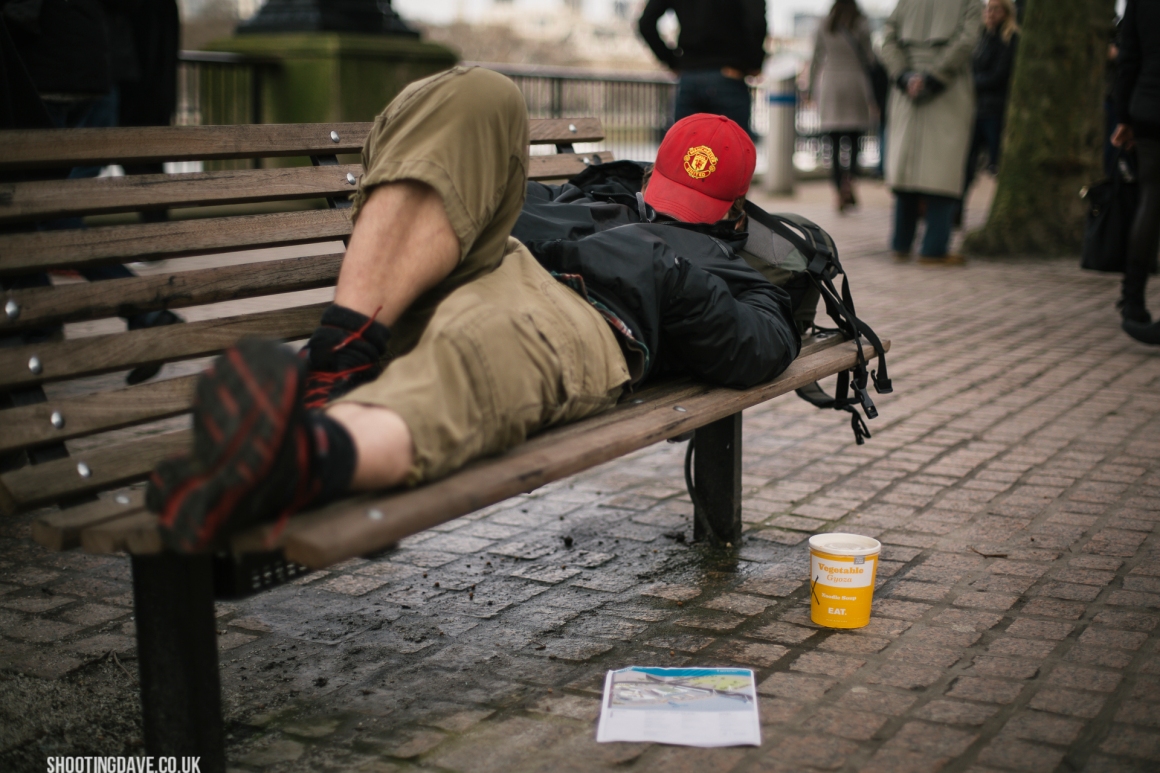 …and a Utd fan dreaming of former glory days. (Wow that was odd, two football references in one blog, very unlike me). 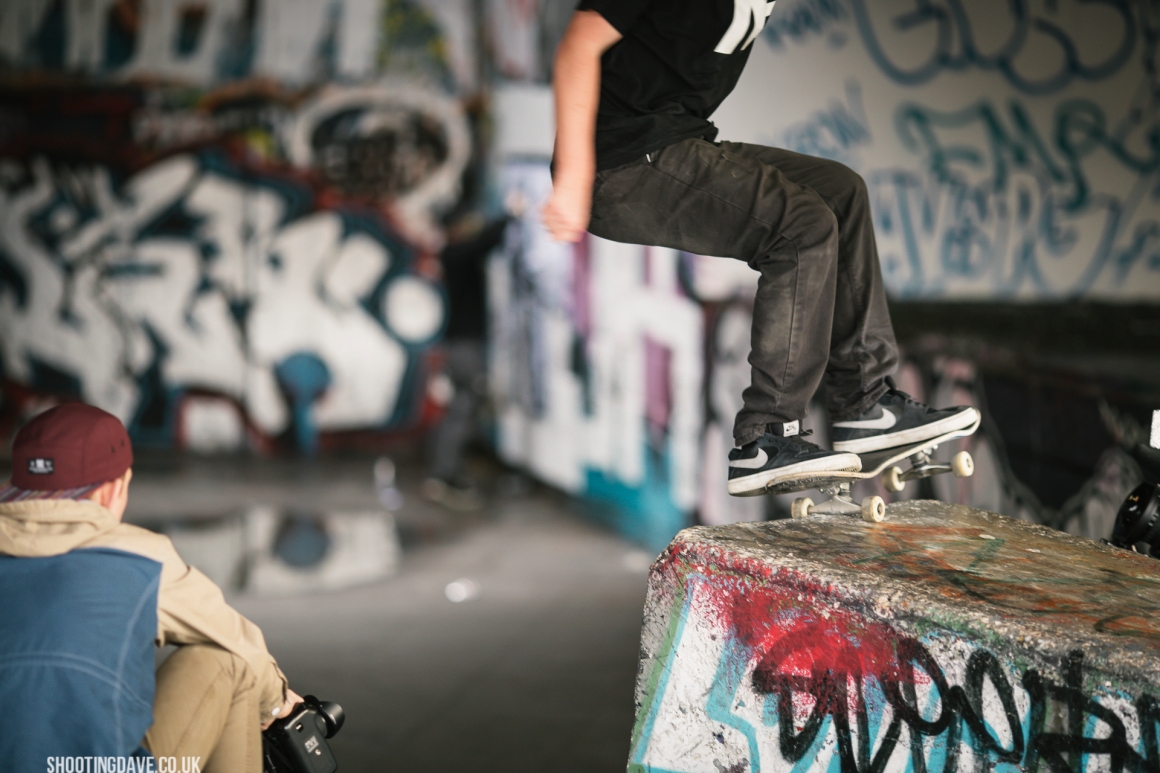 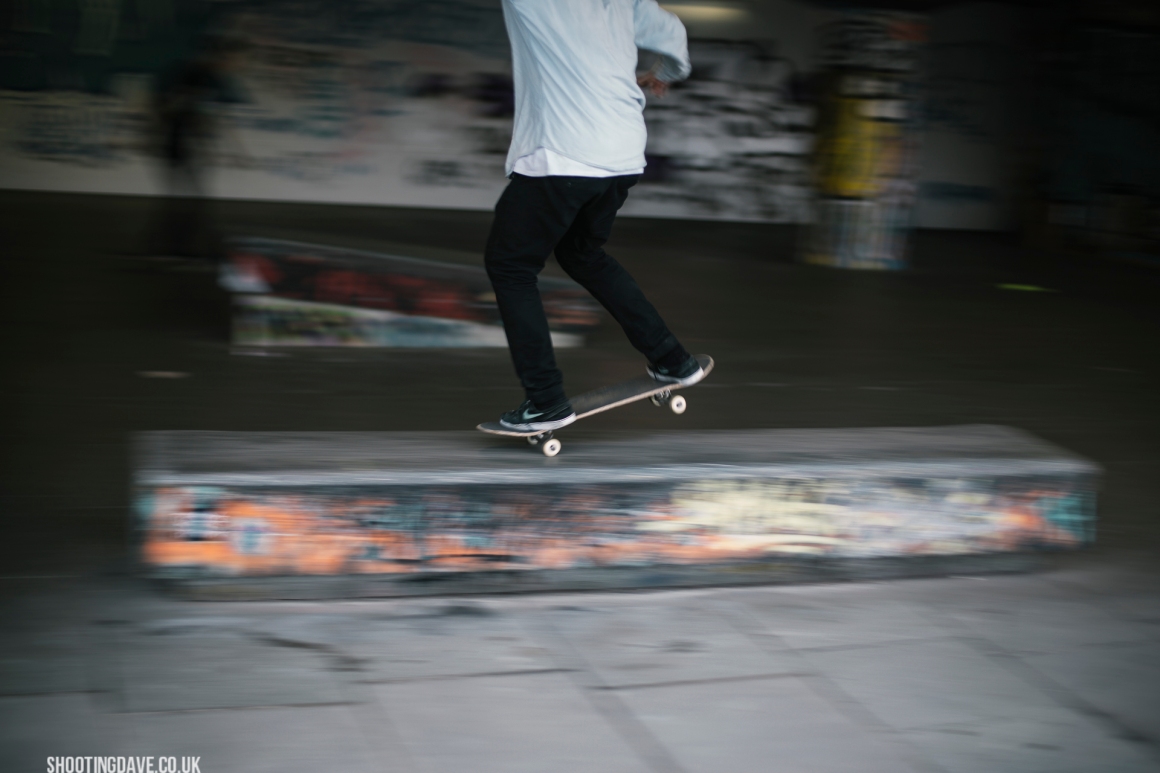 At the South Bank we found some skaters but it wasn’t exciting enough for us to stay, plus the weather looked as if it was closing in.

We started heading in towards Soho as the light was fading. We stopped off at a pub to decide where to head off to next. We decided the right thing to do was try and bully James into buying a 400mm f/2.8 lens from Nikon so we headed off to Park Cameras on Oxford Circus.

As we arrived on Oxford Circus, it pissed it down. Hardest rain I have felt in a long time! Hence no more photos. It was a good day, I think we all gained some confidence in street shooting and I learnt not to hide behind long focal lengths.
SHOOTINGDAVE